Longmeadows Farm is listed on the National Register of Historic Places.  It is a prime example of a culturally significant landmark containing both historic and unique architecture.

Visit The Maine Historic Preservation Commission to see our listing.

The current farmstead has been in agricultural use since 1786.  Capt. Andrew Richardson of the Revolutionary War originally owned the land.  The land was then sold to Moses Stacy and stayed in his family on and off from the early 1800’s to the middle of the 1800’s.  The farm was historically known as the Moses Stacy Farm.  John B. Colcord (a resident of Fairfield) purchased the land from the Moses Estate.  John Colcord greatly improved the beauty of the estate when he built the current house in 1882.  The barn, after being destroyed by a fire, was re-built and completed in 1899.

The Browns have been farming the land since 1937 when Charles Orman Brown bought the land after the Great Depression on back taxes.  Charles gave the farm its current name: Longmeadows Farm. 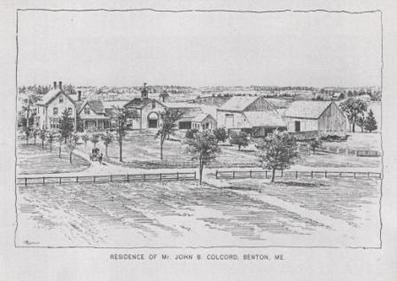 A sketch of the original Colcord Homestead. It can be found in the History of Kennebec County

Some Facts of Interest:

I am an English teacher by day, mother and farmer's wife by night, writer whenever I find the time.